In humans, the signs of Alzheimer’s are forgetfulness and a general lack of awareness. In pets, it shows up in changes with eating and sleeping habits. According to one veterinarian, a natural supplement appears to help. 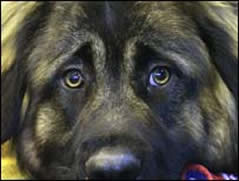 At age 12, Sepp is showing signs of old age.

“He will get up from sitting for a while and he will take a few steps and then he just stops and stands there, kind of looks around,” says Sepp’s owner, Laurane Schnorbus.

Veterinarian Shawn Messonnier, D.V.M., says one out of four dogs and cats over age 7 has a cognitive disorder like Alzheimer’s.

“In general, owners will tell us that their pets just seem senile. Maybe they’re sleeping a little bit too much, maybe the cat’s not using the litter box as well, or the dog’s having some house training issues going on,” says Dr. Messonnier, of Paws and Claws Animal Hospital in Plano, Texas.

There’s one prescription medication for Alzheimer’s available for dogs — none for cats. But Dr. Messonnier says a natural choline supplement called cholodin may be better. He tested it on 42 dogs and cats. “About 75 percent of them showed positive results when we used the cholodin. In my own practice, I actually get closer to 100 percent because I’m starting earlier than some of these pets were started,” he says.

Jones says, “They put him on cholodin, along with other neurological vitamins and he has never had another seizure since — not one.”

Dr. Messonnier says, “Choline works with seizures as well, but a nice side effect of that is any signs of cognitive disorder that the pet is exhibiting will also go away as their seizures come under control.”

Some pets experiencing cognitive disorders will begin barking or meowing at the wall. If you notice any changes in your pet, it’s important to have them checked out. Blood work can determine if they are suffering from any other physical diseases.

This article was reported by Ivanhoe.com, who offers Medical Alerts by e-mail every day of the week.