Thank you to Dr. Christina Fuocco from Whole Animal Gym in Philadelphia for this case study.

Roland is a 3-year-old neutered male Pomeranian with a history of neck pain dating from April 2016. At that time he was treated by his primary veterinarian, Fairmount Animal Hospital, and VHUP’s Emergency services with various pain medications, and he received a series of acupuncture treatments at WAG, to which he responded positively. By the end of May, he had gone 3 weeks without back or neck problems, at which point his owner discontinued regular acupuncture treatment. For over a year Roland did fairly well. He suffered occasional incidents of back and neck discomfort that corresponded with instances of overexertion and were usually resolved satisfactorily with Rimadyl. His overall physical activity had decreased, but his pain seemed effectively managed, and his overall quality of life was good.

At the beginning of July 2017, Roland presented to VHUP due to indications of pain and progressively weakening hind limbs following an instance where he ran down the stairs. He was diagnosed with intervertebral disc herniation T11-12 and underwent a right sided T10-13 hemilaminectomy. His surgeon, Dr. Petesch, recommended physical rehabilitation that included sling-walking with a Theraband. Roland visited WAG 3 weeks post-op, and in addition to hydrotherapy and at-home exercises was recommended use of a Walkin’ Wheels cart, which he borrowed. Roland was on crate rest most of the time and was very excited about going for walks: we hoped the cart would enable greater mobility in addition to eliminating some stress on his back from using the Theraband. Roland’s owner had recently moved to a place with no stairs, which also made the cart a good choice.

Although it took him a few days to adjust, Roland quickly became proficient in his cart, and within two weeks of his return to WAG he had worked up to 2 x 10-15 minute cart sessions daily. By mid-August, Roland was regularly attempting to use his left hind leg to push himself into a standing position and had stood up on his own at least once. Roland was more enthusiastic about walking in the cart some days than others, but sporadic interest in walking was a pre-injury characteristic. One week later, continuing regular at-home exercises and cart sessions, Roland was able to push himself into a standing position and take 2-3 steps on his own. By September, he was able to walk 4-5 feet without falling and graduated to more challenging exercises. During his hydrotherapy sessions, he worked up to 4 x 2 minutes with only light tail assistance from the technician. Because IVDD is considered a congenital disorder, Roland’s insurance denied his owner’s claim, and he had to discontinue physical therapy. The combination of hydrotherapy, at-home exercises, and regular cart sessions helped Roland make steady progress in his recovery, and the cart in particular improved his quality of life as he regained strength in his hind limbs. 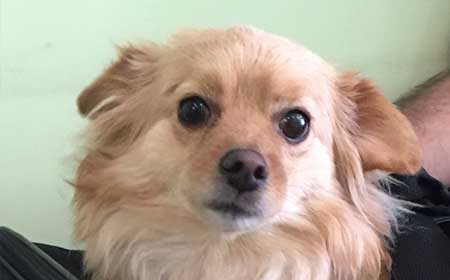