Nuka was a 3yr, MN, Akita who presented for Physical Rehabilitation in 2013 at VCA Veterinary Referral Associates. He was two weeks post op a right TPLO and had a history of Cervical Vertebral Instability which was being conservatively managed at this point. Nuka was on pain medication for the TPLO and was partial weight bearing on the right hind leg with moderate muscle atrophy due to the CCL injury. Surgery had gone well and the recommendation was rehab sessions twice a week for four weeks.

The second week of rehab for the TPLO Nuka presented for a session and the owner had noted a “popping” noise coming from his right hind leg. She didn’t think he seemed painful but the noise seemed to happen every time he walked. The owner noted that Nuka had trouble getting up from a laying down position recently and seemed to get his hind legs crossed when doing so. Nuka was reevaluated by the surgeon to assess where the “popping” noise was coming from. It was determined on physical exam that he had Sub-luxated the right hip and was confirmed with radiographs. The right hip was reducible at this time. We think this likely happened due to the pain medication and his CVI creating less body awareness and causing his hind legs to get crossed when standing leading to a traumatic hip sub-luxation.

The surgeon discussed recommendations with the therapist currently working with Nuka for rehab. In a large dog, the options were a Total Hip Replacement or find a way to finish his TPLO rehab while keeping the hip from luxating further while also managing his CVI symptoms which had flared up. Braces were discussed, but the only option was an expensive custom Orthotic which would take time and money to order.

So as Nuka’s therapist, I decided to come up with a brace solution on my own to support the right hip. The Hip-EEZ and Hip Bridge were created at home with materials I had laying around and applied to Nuka during the next rehab session. The Hip Bridge sat directly over the right Femoral Head and when the brace is secured it places pressure down and in on the Femoral Head. This was enough support to minimize the Sub-luxation and allow rehab for the TPLO and now Hip Sub-luxation to continue. Based on the new injury, a recommendation of 8-12 weeks was made of twice a week rehab for the TPLO recovery and to build as much muscle around the hip region to support and hopefully avoid a THR surgery.

The rehab treatment plan initially consisted of Laser Therapy, Biscuit Bends (for the neck), Cone Weaving, Weight Shifting and Underwater treadmill sessions. The Hip-EEZ was worn for all land based exercises. Manual therapy was not completed in this initial phase due to the hip sub-luxating during range of motion. The Hip-EEZ was not worn during Underwater Treadmill sessions but was applied when done. Nuka wore the Hip-EEZ during all walks at home and most of the day and then it was removed at bedtime.

After four weeks, the Hip-Subluxation frequency during gait was less and the surgeon was impressed. The “popping” sound was no longer heard and the right hip didn’t Sub-luxate while wearing the Hip-EEZ at all. Manual therapy began, land bases exercises such as cone weaving, 3 legged stands, weight shifting and Biscuit Bends continued along with underwater treadmill sessions. The reps and duration of exercises and treadmill were increased based on the patient’s improvement. Weeks four through six continued with this treatment plan.

During week seven and eight, cavaletti poles were added along with balance disc exercises. The underwater treadmill, laser therapy and manual therapy techniques continued along with everyday wear of the Hip-EEZ. Improvements in right stifle extension and flexion were noted along with improved neck range of motion and comfort. Proprioceptive deficits in the left and right hind paws had improved as well and we moved through the CVI flare up. Overall we were all happy with Nuka’s progress and continued forth to build as much muscle as possible on the right hind leg.

During weeks nine through twelve, the reps and duration of exercises were increased again to meet the patient’s ability. Nuka was walking for almost 30 minutes in the underwater treadmill after a 30 minute land based workout. His walks at home while wearing the Hip-EEZ were 20 minutes in duration 3-4 times daily. He was rechecked by the orthopedic surgeon on week twelve to discuss progress and next steps. She watched him walk without the Hip-EEZ brace on. No “popping” was heard. Physical exam revealed there was no Hip-Subluxation during range of motion anymore. In fact, the right hip wouldn’t luxate at all. VICTORY! The surgeon was impressed, the new recommendations were a slow return to normal activity and to wear the Hip-EEZ as a precaution during this stage as well. The right hind leg had rebuilt 6cm of muscle mass in a three month time frame and the TPLO site was completely healed.

Nuka returned to normal activity uneventfully and occasionally had a CVI flare up but was conservatively managed well for years with simple stretching and proprioceptive exercises. Some four years after his right hip injury he tore the left CCL. Prior to surgery elsewhere the owner requested hip radiographs to assess the right hip. She was concerned with his history and was afraid of a possible repeat injury after this TPLO surgery. Radiographs were completed of both hips. No sign of injury or arthritis were noted on the radiographs at all. There was no indication he had ever injured the right hip.

The owner kept the Hip-EEZ all these years as a just in case. Nuka was the inspiration of the Hip-EEZ and the very first case study. He continues to do well today and is clinical proof that the Hip-EEZ brace can aide dogs, especially large dogs with mild to moderate hip sub-luxation injuries. 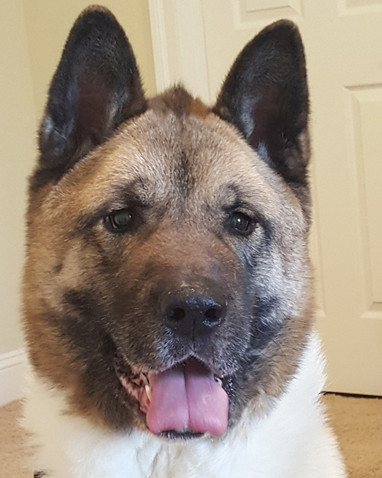